NOTES ON THE GOTHIC

“So true it is, that man’s mind alone was the creator of all that was good or great to
man, and that Nature herself was only his first minister.” Mary Shelley, The Last Man


At the end of all things

the wheel that turns in on itself


At the dawn of the Twentieth century

a mill wheel never at rest,

or a miniature planet in a glass globe on a desk,

an atrium entering into the fine, wall-papered study
of a rich Victorian,

the walled garden beside,

then a cane and a felted tweed vest.


What is terra
but a prism to see the heavens through

modeled on our view

as the end of the long century
splits and births

the everpresent urge for old and new:

industry to remake us as

in the image of

both decay and the Super-
human--

such origins are the stuff of nightmares.


We had a terror of origins, gender marching
as skirts and boots in the mud, manifestoes,

amidst chaos. We have a terror
in the midst of yearning.


Cold, modern castles and the landscapes of the past

speak our language. Or we make it.

Realm, globe, future, frame with a picture
that is a wall


Mary Shelley woke up
at the Twentieth century

which was the end and beginning
of all things

with a dim view of the future,

looking far and wide
from a secluded precipice

in the silence of her garrett study in Italy.


As she was truly alone,

for all of her loves were dead
she made a thing in the image of man, a last

from the elements of the world,
so completely misunderstood yet so human,

that he could not exist.

He was like the last and first, the snake and its tail.

She brought him into this world,
an alchemy

from the primordial and the electric,

​for what we have become, don’t pity us

try to love us 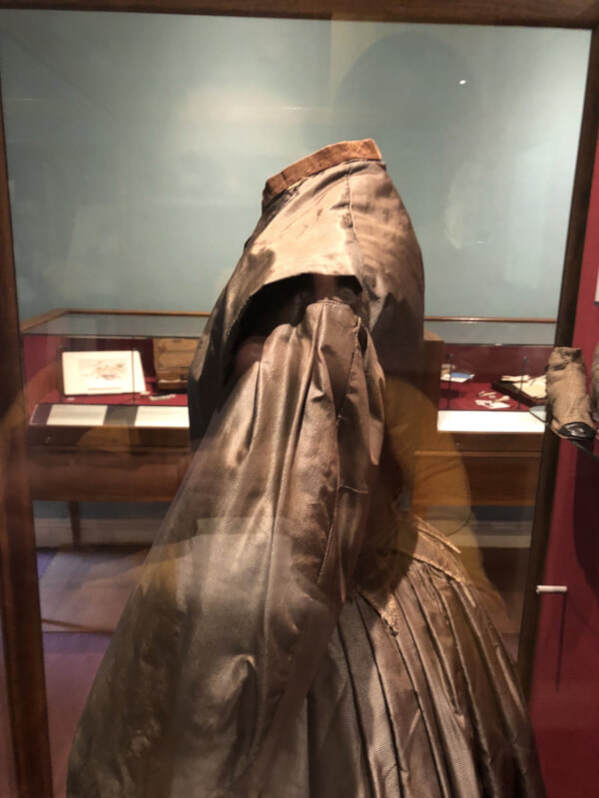 “Hovering Dress of Charlotte Bronte under Glass,” Bronte Parsonage Museum, Haworth (Melissa Buckheit)
© Copyright Melissa Buckheit 2020
Melissa Buckheit is a queer poet, activist, dancer/choreographer, photographer, English lecturer and professional bodywork therapist. She is the author of Noctilucent (Shearsman Books 2012) and two chapbooks: Dulcet You (dancing girl press 2016), and Arc (The Drunken Boat 2007). She translates the poet Ioulita Iliopoulou from modern Greek, and is a recipient of two Pushcart Prize nominations. She founded and curated the innovative Edge Reading Series in Tucson from 2008-2016, and has taught at Pima College, University of Arizona and Zuzi Dance Company. She lives in rural Northeast Connecticut. Her work has previously appeared in Molly Bloom 17 and 19. Find her at melissabuckheit.com.