FROM THE RIDGE
A Devon triptych


Mapping the Ridge
One day,
when I and mine are gone from the thinning map
long following an exploratory dig there’ll be the big reveal
tracing palm-lined crossings on field’s understory,
where are the old homepaths -

you in future seeing this
may say ‘she got it wrong’.

As it is, I cannot wait
moss & toadstools sprout upon the map
litter
the ancient fields – Great and Lower Villies, Whitemoor Meadow,
Dagger’s Close
& High Ridge Down.

Listen! Look between the keening stones …

I have the page, the empty animated field
its long-established grass
grown over those long-buried texts
that grew over and outgrew,
vanished with the polished swords,
the picks the soldiers used
when they arrived
to make the track,
to chop the oldest oaks with chisel and axe
to rape the fields on the ridge that overlooks the place
that lay just south -
where they constructed the road
then built the fort
where they paused to stroll to the brow of the ridge to look at the view
that lay just south of the rim of the hill,
where they built the station on the long road where the carrus ran,
where they turned back
to lift the hatchet
to build the country house, the ville,
vicus dotted beneath,
where they took a break
to look east to the groves
just east of the ridge
on the Herpath trail - ‘where the rushbrook flows from Taw to the Nymet’.


I cannot wait,
toadstools, mosses sprouting on the latest plans.
After the big reveal
when you pause to study your digital maps
will you find your own ways
to the beckoning future,
retrace the old lit-up paths to home
and hold them like past’s ever-unfolding
beating in the palm of your hand
told by those who knew you then? 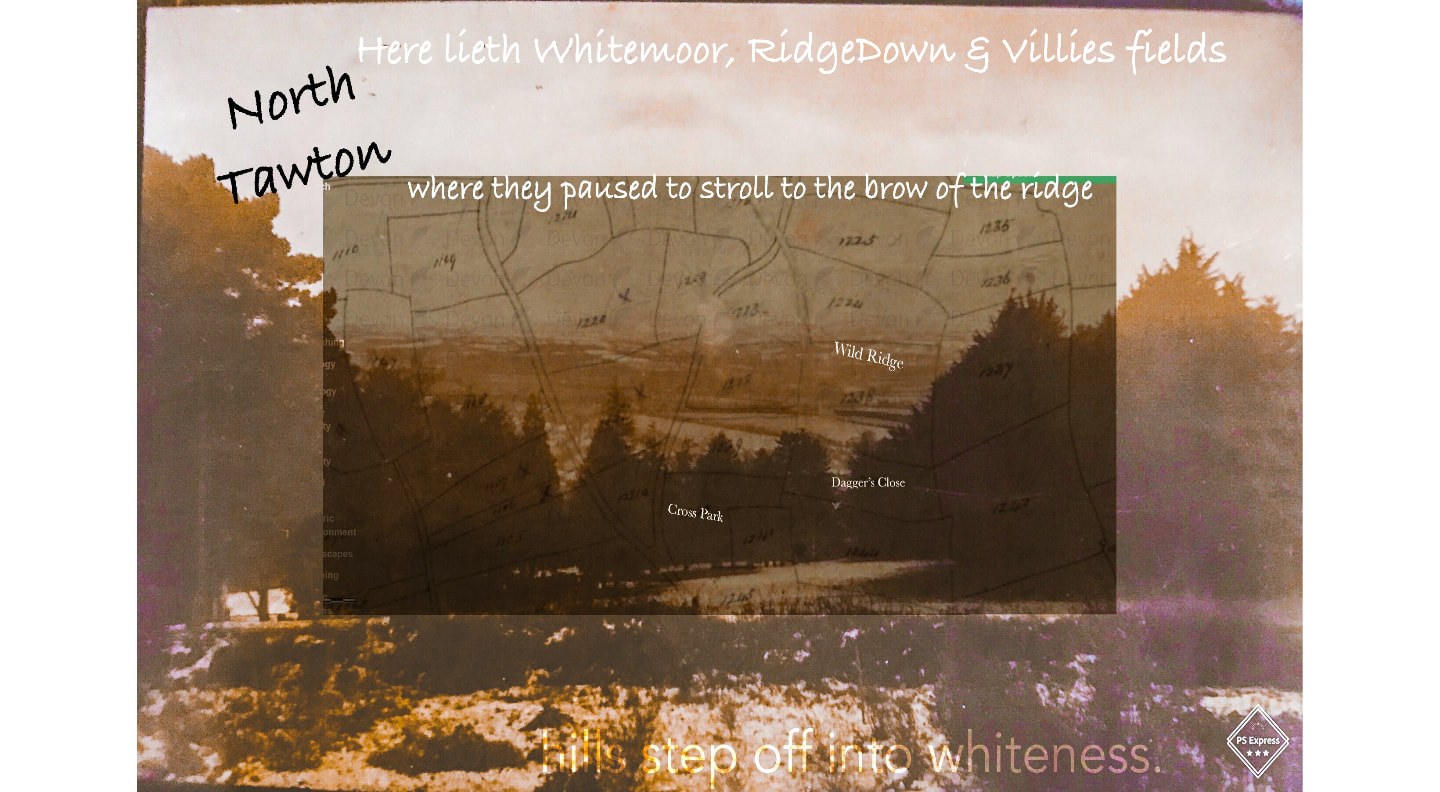 looking back, we post-war kids
were hardly aware
of solid surfaces –
back of our hands,
boards, seat of a chair,
the glass-floor -

we were footless,
dizzily spinning round
the slippy verandah pole,
or whoozing out and up
on our wild ridge wind,
always stretching up
to catch the pirouetting balls.

Perhaps we were first to sense
the wacky energies
of sub-atomic particles –
the hedge-den platform
our uncles put up a generation before,
where beneath green’s whirligig
we perpetually hover
on our enchanted carpet
and thrash on the turbulent seas.

We may be
just there
yellow stones pivoting in air –
as I said, when it comes to
gravity we were ignorant - the law,
return to earth, so
I don’t know why,
someone says
Let’s bury a lozenge tin
Let’s dig under Douglas fir
Let’s fill it with our special things –
my rag doll’s bow, your
comb, the lone-pine badge.
Let’s leave treasure for someone-in-future to find.
What we didn’t know – or maybe did -
was how our grounded earth
has Nike’s historical wings.

Now, tin’s long past rusted
under firs below the hedge
and looking back, full-moon legions
casting their translucent x-ray light,
have mindfully spun a herepath course
over our ridge’s wildest fields.

In front the once den-tree,
the steady beat of solid ground-bass rift
of earth in Dagger’s Close,
(field intent with mystery),
begins to shift
give up its ghosts -
how the glittering swards glint
juggling past’s interpretations -
and Nemetona,
She grounds the dissipating energies
anchors us into rootedness. 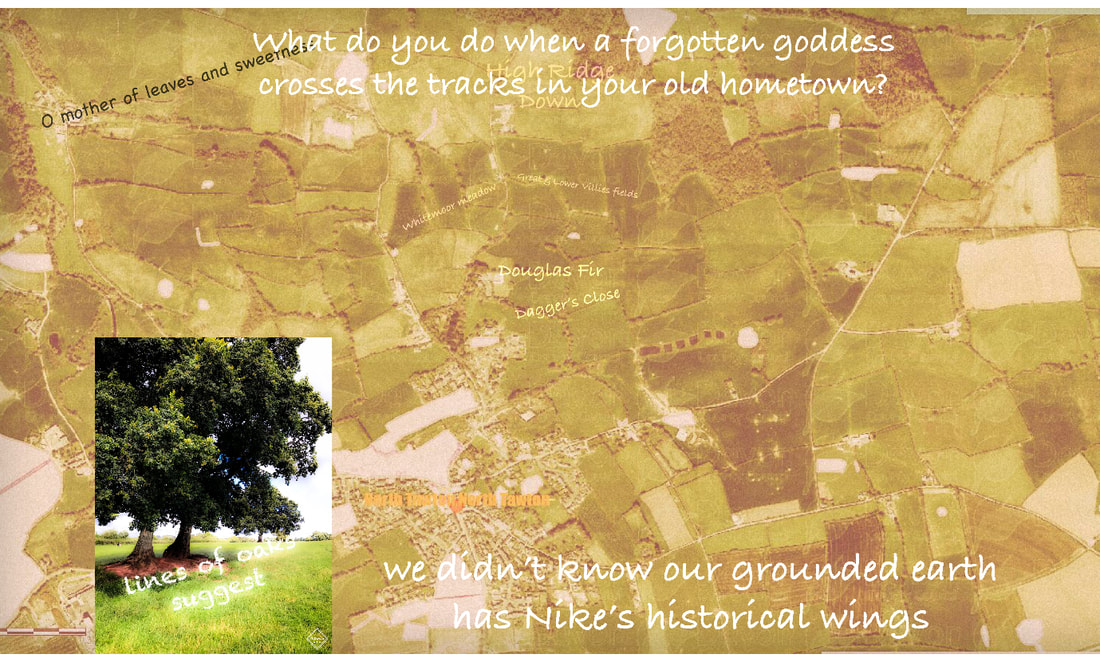 What do you do when the shadow of a forgotten goddess crosses the tracks before you in your old hometown? …

that safe place           where wanting to clasp the dormouse close
you cupped hands by the May hedge
and at the stream
– near where the cows tore up mouthfuls of grass,
let out soft moos –
skimmed silverfish into jars,
where frosty nights         sills sparkly lit by moon
- she’s motherly O
with the man in her mouth and full –
you talked to the owls behind the fir -
hooting back they woo oo -
and then you realise she is not sweet and sylvan
with the dulcet tones of Mary -

you must instead face up to the gore
you begin to see, though half want to skulk away -
your beloved corrupted land …
*
each of our properties
carries our hallmark
signature, the brick …
*
under the houses where today these fuming cars line dominoes along town’s eastern edge –
the road whose owners leaving mornings slam doors then later rush home to zoom into the
latest what’s app text illuminating others’ smiley emoji day …

wanting to fill in lost poem’s inner space
you view it on the field mapping page – where Great Batheway Head, Long Batheway
Head field, West Batheway
return you to your deep earth past …
if you’d been there, fly
on the other site’s walls
observed the turbulent comings, goings,
there, in Barton Meadow where the lines of oaks suggest rooted remnants of the
Roman road,

but beware, though Picts are respected up there in the northern lands, down here in
moor’s southern shadow valleys, if you mention,
only whisper, lower-case,
druids
(so those out there who don’t want to hear                         won’t)

will lift our breath, voice in unison
with red Devon’s beasts of the field
deathly the steam
make our homage
honouring
her, who we have now become. 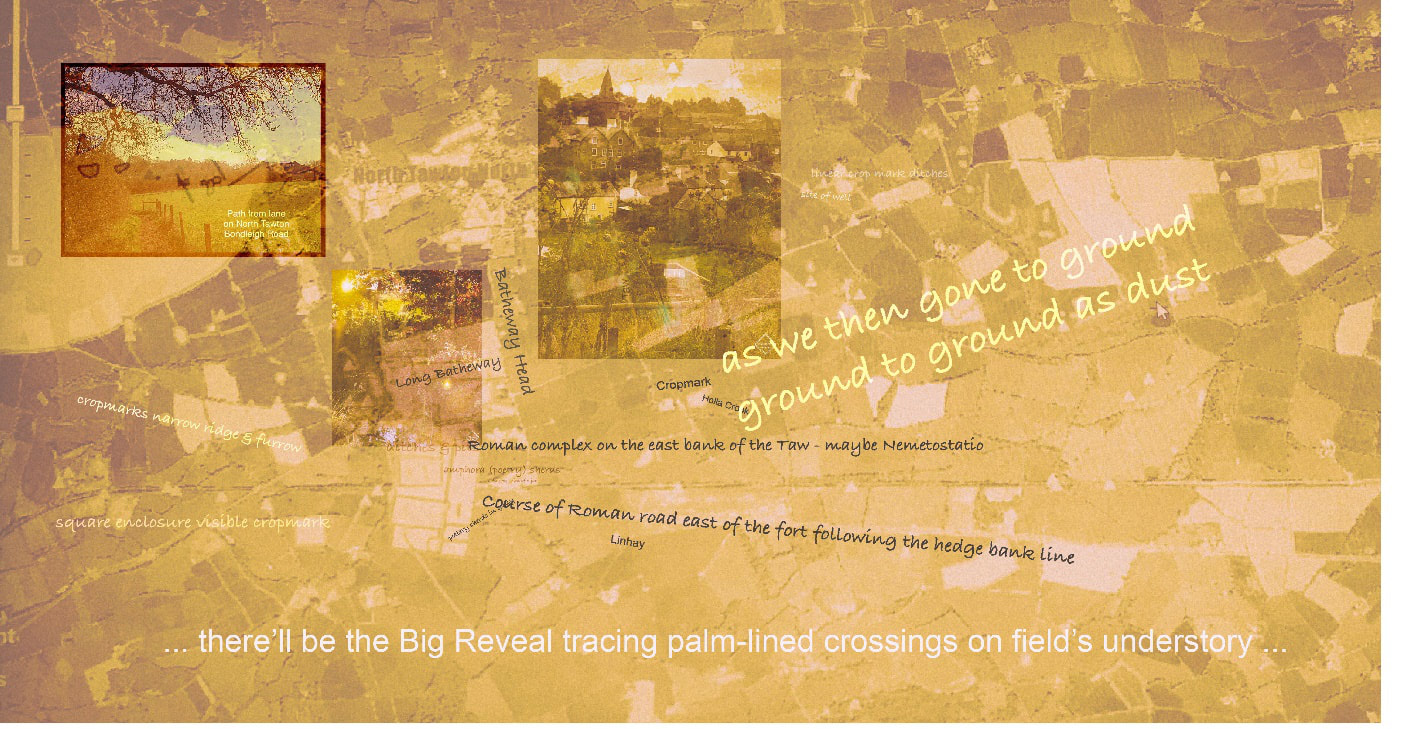 Note: The mid Devon area centred on the parish of North Tawton has recently acquired a make-over in terms of its links with the forgotten past. Not only have recent archaeological investigations revealed that the local Roman site may be of major importance but retreating into even darker periods of history the landscape’s association with pre-history and ancient ritualistic sites is gradually unfolding. Once only thinly mapped, local environmental maps are rapidly filling up with references to newly discovered remains. Batheway Fields is the name of the more recent crop of new houses in the parish of North Tawton. The name nods to one feature of the ancient significance of this landscape, which archaeologists are now naming as a possible base for the 5000 troops of the Second Augustian Legion (and thus at the time larger than Exeter); ten centuries later, in 1549, the area was in the thick of the action for Sampford Courtenay Rebellion skirmishes; many centuries before both of these, this territory was focus of the large sacred wood called ‘Nemeton’, where Nemetona, ‘goddess of the grove’ and - because of her association with the Roman god Mars Lucetius, - of war, presided.